RadiationBurn is an award winning independent games developer that specializes in original I.P. and game design.

Prior to becoming independent, its two core members had worked on over 40 published games across all major games platforms from the Nintendo DS to PlayStation 3.

As RadiationBurn, they have created the critically acclaimed titles ‘Bullet Trap’ and Microsoft’s Dream.Build.Play. 2010 Grand Prize winner ‘Newton Vs the Horde’. They then went on to make BOOMBA! which has to date over five hundred thousand downloads and a 4+ rating on most app stores.

Please feel free to have a look around the site and don’t hesitate to contact us if you have any questions.

That is the limit of the serious information to be found on this page.

Years ago now, a couple of adventurers set off  to find a free land of their own where they could find lost relics and create an empire of unparalleled unparallellableness. They met many other adventurers and formed lasting bonds. Like most tales there was high adventure, profound joy, and devastating sorrow (mostly handled in a manly way of course). It’s also a modern tale so it falls under the rules of “Anyone  can die” and most do. These are their stories.

Disclaimer: Despite the quite douchey and serious pictures, don’t expect this story to actually make any sense. 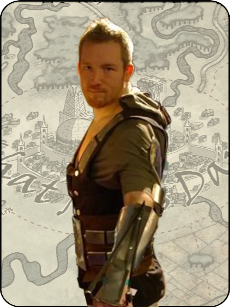 Wishes he was a: Ranger

But is actually a: Assassin/Sorcerer

Tale: Graham set out as part of the initial party on a quest to do something that wasn’t what they were doing before. To be fair it was a vague goal but he was arrogant enough to think he could manage to accomplish that vague thing of non-descript awesomeness. After surviving the brutal assault at the last stand at BOOMBA! Graham set himself a new set of improbable goals to attain and then got on with making a mess of things in a whole new way.

Survived: Many ancient battles,The end of a world incident, The pursuing authorities debacle, The Swarm of Mongrels, The Bullet Trap, the Horde, and the last stand at BOOMBA! Numerous random encounters that produced no notable loot.

Commonly chastised for: Giving only partial info and expecting everyone to infer complete data, even when impossible. Being Pernickety.

Most likely to say: Hope for the best. Plan for the worst. 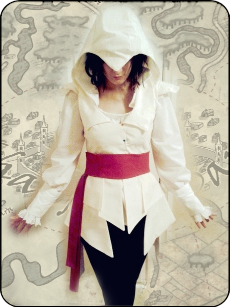 Wishes she was a: Knight

But is actually a: Ranger/Paladin

Tale:  After overcoming the challenges of initiation, this adventuring vixen joined the group to tackle the Horde, but soon found herself facing down the Swarm of Mongrels. Chantelle is a zealot of the Church of Geek and when not killing people attempts to be more civilized by channelling Zooey Deschinal through Audrey Hepburn. After valiantly leading the charge on multiple fronts during the last stand at BOOMBA!, she has nobly chosen to journey onward with Graham and can only be assumed to share his suicidal desire to pick impossible fights.

Survived: The pursuing authorities debacle, The swarm of Mongrels, the returning horde, and the last stand at BOOMBA! Several iRaids which yielded little reward.

Commonly chastised for: Stressing about her ability to achieve her goals, and scratching inappropriately.

Most likely to say: six and two threes.

There are many talented adventurers who have helped in our quests from time to time, and some of them didn’t even die horribly. 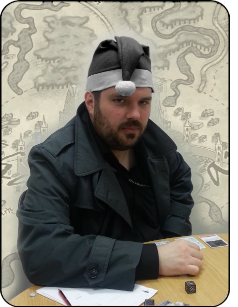 Wishes he was a: Swashbuckler

But is actually a: Gambler

Tale:  Ben is a bitter ex-adventurer. He’s made plenty of enemies and friends on his travels but has since entered semi-retirement. On occasion he will turn up to tell the adventurers what they are doing wrong, and perhaps even help out a bit when the need is great. He is noted for having travelled the length and breadth of the Interbutt nations, bringing back many tales, and telling them with an eloquent use of language (and by that I mean swearing.)

Survived:  Many battles in the distant past, and the last stand at BOOMBA! (by hiding)

Commonly chastised for: Not checking his sources, being angry about trivialities.

Most likely to say: I wish they’d die. I hate them so much it is literally ‘expletive! expletive! something metaphorical’ 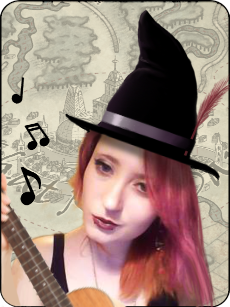 Wishes she was an: Agent of death and suffering

But is actually a: Sarcastic bard

Tale: Sarah has chronicled many a tale of adventure, most of which end in tragedy. This has lead her to being somewhat disillusioned with the concept of finding treasure at the end of any expedition. Instead she simply gets enjoyment from watching others make foolhardy attempts and fall on their faces. Sarah’s dry tone of voice can also often make it difficult to tell whether or not she’s being sarcastic. Thankfully she is very seldom NOT being sarcastic so it rarely leads to confusion.

Survived: The Living Dungeon. She translated the scriptures of the gates and then ran off to acquire some kind of scroll called “The Degree”.

Commonly chastised for: leaving things until the last second

Most likely to say: Nothing, but the sound of her eyeballs rolling is audible. 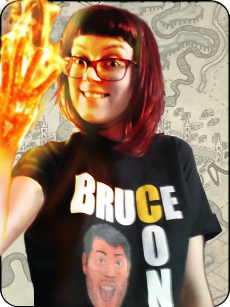 Wishes she was a: Tavern Wench

But is actually a: Scribe of the Archaic

Tale: If Holly had her way, every cloud would have both a silver lining, and a gold lining, and the actual cloud would be made of cotton wool. We found Holly making “happy day to you sir” gift baskets in a market place but written in unfathomable ancient text. Turns out Holly was particularly adept at translating ancient instructions for spells. Holly isn’t all sweetness though. She has a mean streak which strangely, she directs entirely towards herself. After defeating a monster, Holly often curses herself ruthlessly for not having been able to do it efficiently using the spell she’d collected from it’s corpse after the fact.

Survived: The Living Dungeon. She translated the scriptures of the gates and then ran off to acquire some kind of scroll called “The Degree”.

Commonly chastised for: self fladulation

Most likely to say: “awww guuuys” 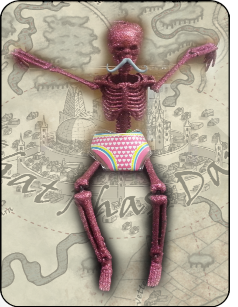 Sir Chillington of the Fabulous Underworld.

Wishes he/she was a: Fabulous Bard

But is actually a: A fancy pants malevolent corpse

Tale:  No one knows who, what gender, or even what species this sparkly cadaver is. It just turned up saying that it was going to help but has spent much of it’s time either indulging in tremendous feats of vanity, or trying to usurp power from various members of the group. Perhaps once Sir Chillington and Ben were adventuring buddies but now the creature is mostly driven by self interest and a deeply routed desire to become more and more fabulous.

Survived:  Avoided all battles but continues to strive for power over the group.

Commonly chastised for: His dastardly plots

Most likely to say: Nothing, but you can see in his googly eyes he’s making an evil “Mwah ha ha” sound in his mind.

Rew was once a master thief capable of great deeds. He had lead the group through many battles with the GoGo-Mechanism. Unfortunately he capitulated too much with the authorities during that debacle, and was brutally mauled by the swarm of mongrels. He survived the attack but unable to move forward, Rew remained behind during the Last stand of BOOMBA! to this day, he still dwells hoping to claim final victory. His soul is at stake. 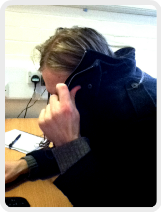 Joseph joined the group early under the banner of the GoGo Mechanism. He triumphed in the confounding Maze of White spheres and fought well against the horde.  He then went on to fight bravely during the swarm of Mongrels and the Last Stand at BOOMBA! but eventually was forced to retreat as his people needed him in the far south. 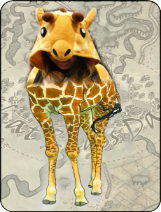 Fee reckons that almost any problem can be solved with a combination of nice cups of tea, and hugs. She adventured with the others for several years and spread the word of their adventures far and wide. After many adventures however she found herself leading her own team on a different quest to defeat the unpronounceable Sphlem. After many cups of tea and hugs the creature agreed to change it’s name to Splemy to clear up any confusion and the epic looks to be ending peacefully.Ever since then, Fee has been attempting to retire from the adventuring life but can’t ever seem to turn down those who need her help. 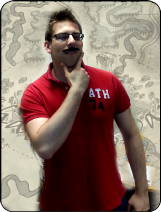 Adam of nowhere in particular.

We were sold on the prospect of Adam of Eternia but what we got was this guy instead. Less “He-man” and more just “Hey man”. So far Adam has eked out a meagre existence by being border line adequate. So far he hasn’t exploded, or died from a non-threatening illness, so that’s a plus. He also has the incredible power to make Ben miss when throwing items at the bin. At some point Adam died. no one noticed. It’s probably been years. 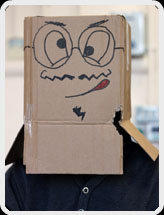 Thief, jester and prankster. Samy was all of these and more than a little mischievous. While he often enjoyed winding up the other adventurers, especially Rew, he was a vaulable asset during the war on the Horde and took part in several battles at the Last Stand of BOOMBA!, but sometime during the Swarm of Mongrels attack, Samy vanished. 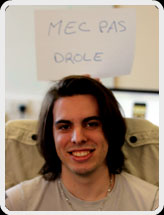 T-Bo as we called him, was perhaps not cut out for the adventuring life. he often struggled on in silence when a little help from the others could have lightened his burden. He barely survived his battles at the Last Stand of BOOMBA! but was sadly torn to pieces by demon puppies during the Swam of Mongrels. 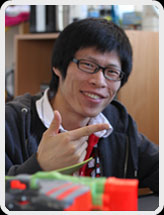 Li, The monk of Beasts

This Silent warrior fought during the Swarm of Mongrels. He tamed many creatures but nonetheless he was separated from the group and was never heard from again. 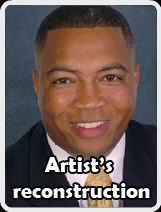 Chris was a Lurker for the GoGo-Mechanism. He quietly fought away in in the Deluxe infinite offensive with his master Rew, but eventually the tide became too strong for him and he was swept away into the abyss. we don’t even remember what he looks like now and had to make up this picture from memory.

Steve was a warrior for the GoGo-Mechanism. He bumbled and mumbled through the initial stages of the pursuing authorities debacle. He struggled often and may have asked for help but since Rew couldn’t understand what he was saying, no help was given. He was mortally wounded in the midst of that adventure and was left dying in Chantelle’s arms. With his dying breathe he made a last request, but no one had a clue what it was so we unceremoniously dumped him in a ditch and got on with things.

The Grinning Ninja and the Thinking Scout.

Marc was a skilled mercenary who trained with Graham and fought in the forgotten War of Rhazoria. Being a mercenary however meant his Loyalty was more to the coin than the company. After the Treaty of Shelved passed, he was offered a deal fighting for the Ubisoftan Empire where he continues to fight to this day.

Andy Chan was a scout who mapped out many territories during the War of Rhazoria. He quietly contemplated his actions but was known often to ignore sound advice. One day he went out, and never returned. We have no idea what became of him to this day.

Tomas the Stoic, and Antonin the Dandy, joined our merry band for a while during the attack of the Horde. Antonin’s looks and charm were sadly no defence against large brutal claws. Tomas fought well but vanished during the battle. His abused corpse was found some time later. We don’t talk about the cause of death.

Robert, Liv and Mike were a trio of Viking hooligans who participated in the forgotten War of Rhazoria. They fell hard in battle shortly before the Treaty of Shelved was signed, bringing a temporary halt to the hostilities between the living and the dead. Only two corpses were ever found however and there is a small hope that a lonely Viking still adventures on somewhere.